Original article by The BPP

An exciting Business Partnerships Platform (BPP) partnership between Australian Agribusiness Four Seasons (4S), the University of Sydney and the Australian Government has led to a new carbon credit start-up with benefits for both smallholder farmers and the environment. The new business AgCoTech has been set-up by 4S to distributes medicated livestock feed blocks in return for carbon offset credits. The establishment of the new enterprise demonstrates the value of cross sector partnerships to test, adapt and innovate inclusive business models.

An inclusive business improving the health of cows and buffalo

The BPP partnership in Laos was focused on improving the health of cows and buffalo. Internal parasites are a significant problem causing poor livestock health, low productivity and even death. Farmers currently have limited access to nutritional supplement products. With improved treatment and vaccinations, livestock health improves, and internal parasite control leads to higher meat yields. As farmers rely heavily on their animals for income and economic security, medication treatment is essential. 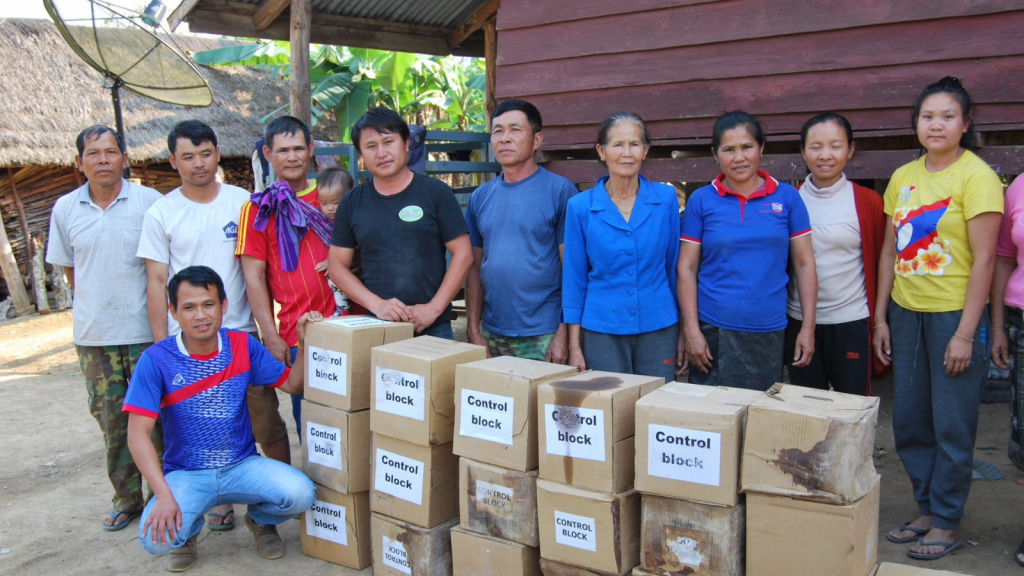 Distribution of the medicated feedblocks in Laos.

Australian agribusiness 4S brought its experience in animal nutrition to the partnership, having supplied similar products to Australian farmers since 1997. The University of Sydney Faculty (USYD) of Veterinary Science brought extensive research experience, having implemented an animal care project in Laos for more than ten years. USYD’s research established that medicated feed blocks have a transformational potential for the livestock industry. The research concluded that blocks can improve the efficiency and therefore the livelihoods of smallholder cattle and buffalo farmers.

With catalytic funding from the Australian Government, the partners were able to test the business model and sell the medicated feed blocks. Through the BPP, the Australian Government provided strategic advice on how the business model could be adapted to be more inclusive of women, who are important decision makers in the farming system. The BPP also supported the partners to conduct a gender analysis of the business and farmer consumers and then implement the findings (more on the study and its results can be found here).

The challenge of profit and sustainability

At the conclusion of the BPP partnership, 4S looked at taking the business model further and was faced with their next challenge. Although they had established that medicated feed blocks were successful in improving livestock health, the local business environment meant the sale of the blocks was not profitable.

Establishing a sales channel in Laos, a country with a developing private sector and where free national government support dominates agricultural input and extension services, was an ongoing challenge.  The affordability of the blocks also remained an issue, even though 4S planned to manufacture in Laos.

Partner 4S offered some compelling ideas that could benefit both farmers and the environment, evolving their business model to a carbon offset start-up where organisations looking to offset their emissions finance the cost of the blocks, rather than farmers. 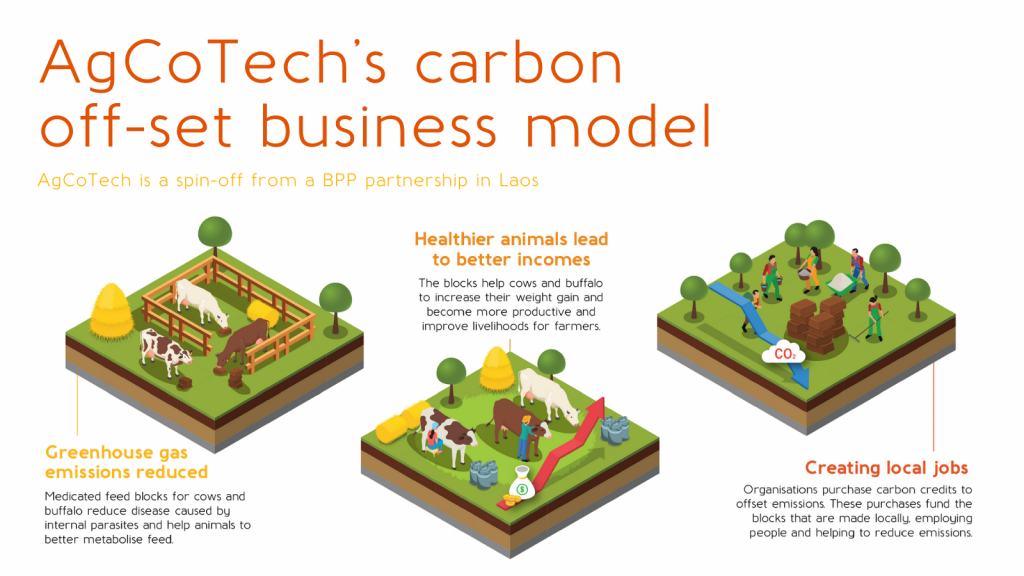 New carbon credit business model a positive ‘side effect’ of BPP partnership
4S launched new company AgCoTech earlier this year in April 2020, with the aim of enabling organisations to obtain carbon credits by reducing greenhouse gas emissions from livestock through the use of the medicated mineral blocks. The new business has social and environmental benefit embedded in its business model.

Charles Olsson, AgcoTech Co-Founder explained “the methane (greenhouse gas) reduction from one medicated feed block is estimated to be the equivalent of 1 tonne of CO2. This model sets us apart from other carbon offset programs which are mainly focused on planting trees or have significantly long lead times – ours is much more nimble and faster to roll out and get credits.”

For Olsson, continuing the distribution of the blocks is the priority – this was established as an effective pathway for transforming the industry and creating healthier animals. However, farmers’ ability to purchase the blocks was less clear and so AgCoTech adapted its funding model.

The blocks will continue to improve an animal’s ability to more efficiently metabolise their feed, making the most of all available nutrients. As a result, animals will be larger and healthier and will produce significantly less methane. Importantly, they will continue to grow incomes for smallholder farmers. 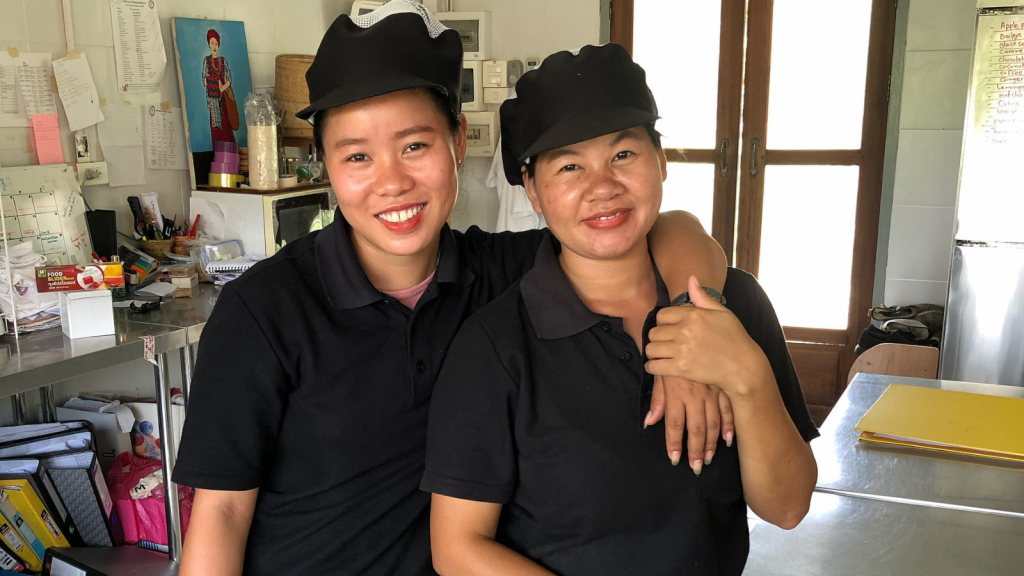 AgCoTech will create local jobs by producing the medicated feed blocks in Laos. When looking for a location for their production facility, AgCoTech connected with another BPP partner, Laos Buffalo Dairy (LBD). LBD is a social enterprise that is partnering with DFAT, the Northern Agriculture and Forestry College and the Provincial Health Department  to scale its buffalo dairy to promote the regeneration of buffalo herds in Laos and to improve rural livelihoods and nutrition.

Not only does LBD have a similar mission to improve the rural prosperity, welfare, nutrition, and health of the local population, with a focus on buffalo farming, and childhood nutrition but it has a similar approach to doing business.

AgCoTech’s medicated feed block factory will employ a local team and the majority of the ingredients like molasses will be purchased from farmers in Laos. Households will then be allocated blocks each year for free to distribute & improve the health of their livestock.

Susie Martin, Co-founder of LBD explains: “Here at the Dairy, we love nothing better than to be involved in innovative ideas that help us meet our aim. AgCoTech is similar to us with its inclusive business model and approach that will benefit local farming families.”

AgCoTech’s Olsson adds: “All stakeholders along the supply chain benefit. From the animal itself, to the farmers, to the suppliers of the raw materials and to the organisations who are wanting to offset their emissions.”

AgCoTech was launched in the midst of the COVID-19 crisis, but given the urgency of the climate crisis, its marketability and relevance remains clear. The model will continue to roll out feed blocks with the associated benefits to farmers.

Now more than ever we need businesses with bold ideas for social and environmental impact. The BPP will continue to work with partners to deliver on climate change and improved farmer livelihoods.

More on the BPP partnership can be found here and AgCoTech here.